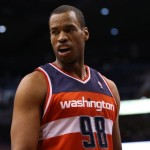 So today 34-year-old Wizards center Jason Collins came out in Sports Illustrated as a gay man.  Yes, I’m conservative.  And yes, I’m going to say it.  “Good for you.  Glad someone finally had the guts to come out.”  It stands to reason that dozens of the “tough guys” we watch play our favorite sports are closeted gay men.  According to most statistics, about 10% of Americans are gay.  I don’t know what it says about our society that Collins’ announcement is such a big deal, but it is.

Within 10 minutes I heard my first, “I don’t care if he’s gay or straight, blue or yellow…” comment.  It was a client, so the only appropriate and professional response was to smile and nod.  On the inside I thought, “I’m sure all the blue people are happy to hear that, but…yes, we do care.  We don’t say much about the fact that most of Collins’ opponents average 2-3 children apiece with 2-3 different women.  But a gay man on the court?  Now THAT’S going to raise an eyebrow.”

As a straight guy, I never had to come out and say, “I’m straight.”  I don’t know what that feels like to come out, but I can’t imagine it’s easy.  I know lots of folks who lost family and friends after coming out.  I knew gay kids whose funerals I attended after they killed themselves.   I’m pretty certain a gay person’s experience is much harder than mine.  I’d be willing to bet the self-discovery process is painful and frightening.  And I’d be willing to bet there is quite a bit of pain along the way.

Women athletes may have it tougher, I think.  Many folks actually assume the best women athletes are gay, but no matter.  She gets to cope with being stereotyped in one of two dis-empowered categories – “attractive sex object” or “scary gay lady” – instead of being seen as…oh, I don’t know…an athlete?

I remember in the 90’s there was a big deal in the press when someone alluded to a member of the Mets being gay.  Fingers pointed at then catcher Mike Piazza, who actually held a press conference to say he wasn’t.   Yeah – we weren’t ready.  (And I was kinda disappointed.  Wished he had let that pitch sail by – it would have made a much stronger statement about how much this shouldn’t matter.)

This time, I hope we are ready  I don’t know Collins, his work on the court, who he is as a person, or all that much about the NBA.  But I’ll give him credit.  As he said in his press release, he was the one who decided to “raise his hand.”  Good for you, pal.