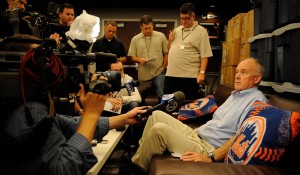 The recent passing of Mets great Gary Carter has largely overshadowed just about everything else in Mets nation as pitchers and catchers reported in Florida.  Without a doubt, all the great words about Carter still fall short of describing how great a Met he truly was, and even more so, what a great guy he was.  Unfortunately, amidst the eulogizing, we’re about to see another fan favorite move on.

David Wright will be wearing something other than a Met uniform next year, and perhaps as soon as this August.

Mets fans are still smarting over the loss of Jose Reyes, so when David moves on it will go from uglier to uglier.  David was rare in New York.  He worked hard, showed up every day, said the right things, and played hurt.  He had a stress fracture in his back last year that cost him time, led him to a .254 batting average, and a tendency to strike out in a big spot.  Some folks feel his best days are behind him.  This has led GM Alderson to the following:

That seems to translate, “If David has a bad year, bye bye.”  But after what happened with Beltran and Reyes, it’s even more likely that he’s dealt while having a good year.  The Madoff mess means the Wilpons have to sell any and all value that exists on the roster, regardless of consequences.  Even if the pundits are right and David is on the downhill side of his career, I’ll take David’s twilight years over most of the “veteran” contracts the Mets have purchased over the years, the vast majority of which were absolute disasters.

I’ve heard the Mets referred to as “bottom feeders” in the draft, hoping to draw a future Seaver or Strawberry from the Single-A and college ranks and pay them next to nothing.  It’s a bit like watching the retired couple that can’t quite afford groceries but manages to scrape together $20 a week for lotto tickets.  I don’t think Alderson has much in the way of better options.  But it’s sad.

The Wilpons have to sell the team.  Please.  They are taking a bath regardless of whether they sell, and the days of building a contender from the draft  and the minor leagues alone are long, long gone.  They’re never going to be able to provide the influx of cash and new energy that will be required to right the ship.

City Field has become the “Grant’s Tomb Shea” of the late 70s.  If you’re old enough to remember, those were the years when you went to the park to watch the stars in the visiting dugout.  It has all the feel of the hapless Mets of the early 60s, with none of the charm.  It’s pathetic.

Ironically, what fixed that problem back in the 1980’s?  The Wilpons bought the team, hired Cashen, and built the 1986 Mets.  Unfortunately, business can be cruel.  These same Wilpons have become the Peyson/Doubleday cadre of the early 80s.  Whatever financial issues the Wilpons face, the Mets are not going to provide a way out for them, so we’re on this particular path until the ownership changes.

So when David goes – and I think it’s inevitable – there will be one less reason to go to City Field or watch the game.  And stupid me, I’ll watch anyway.