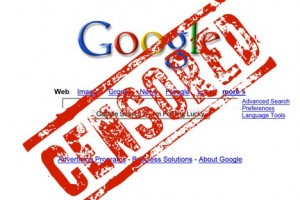 Just in case you’ve missed it , congress is working on a law called the “Stop Online Piracy Act,” and a partner law, the “Protect IP Act.”   It’s why Google has the big black thing on their logo, and why Wikipedia is blacked out.   I’ll give you the gist based on what I read in the two acts (and not simply a bunch of news articles):

As a musician and a web guy, I’ve always been in favor of intellectual copyright protection.  I still am.  It’s the right thing to do, and it’s good for business.  Creative people work hard, they create stuff we like to buy, and we should buy it instead of stealing it.
SOPA and Protect IP don’t protect IPs or Stop Online Piracy.  Instead, it gives the government unilateral control of all IPs and becomes the Imperial Wizard of American Internet Content.  It creates a HUGE government censorship complex responsible for monitoring IP addresses, and deciding which sites get to stay and which have to come down.  These two laws empower our government to sue and jail anyone who stands in their way.    It will turn the Internet into a huge police state, run by our benevolent Department of Justice.
Less government is better than more government.  It costs less.  It takes politicians out of our personal lives.  Our government is hosting wars in several countries.  The dollar isn’t worth the paper it’s written on.  Washington spends far more than it takes in.  But our government can’t stop doing stuff like that, so instead, it will take money from the big media outlets and go into the internet censorship business.
SOPA and Protect IP aren’t going to help internet favorites like Facebook, Google/YouTube, Twitter, and Zynga.  These laws will kill internet startups, small creative groups, new bands, independent filmmakers, young artists, and the proverbial internet “little guy,” (or “little gal” if you prefer).  These laws WILL help huge media companies kill competition, control all innovation, and use the profits to support politicians through the infamous Super-PACs that work diligently for both sides of the political aisle.  Those responsible for sustaining the Internet Police State will be given an endless supply of offender intelligence by the media companies, whose new and improved profit margins will support a cadre of individuals responsible for watching their competition and feeding intel to the government.
Yes, the Internet is the Wild West, and bad things have happened to good people.  The Internet is utterly out of control.  That’s how it was designed.  It is OUR responsibility to conduct ourselves honestly and stand for positive change.  This law won’t just kill the NEXT Google, Wikipedia, Facebook and Twitter, it will kill the ones we have right now.  It would be just plain stupid for us to enact a gargantuan law, spawning yet another government regulatory institution, to take away the last level playing field on the planet.
Wikipedia has a nice “contact your representative” engine.  I suggest you take a look.