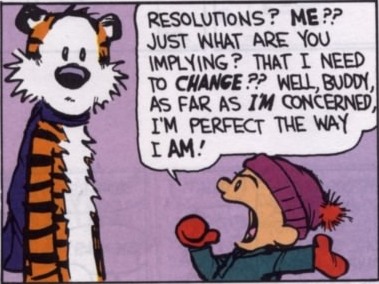 I’m in favor of them, unapologetically.  If I have one criticism, it’s that we tend to make them only once a year.  I kinda think they should be a way of life.

This life is about reinventing ourselves constantly.  Bob Dylan once wrote, “He not busy being born is busy dying.”  If marriage and fatherhood has taught me anything, it’s that we always need to work on the “new and improved” version of ourselves.  It’s how we stay young.  New Year’s resolutions are just one tool in that particular journey, and if we don’t use it, we’re wasting an opportunity.

Young people are growing all the time, and to them it is a way of life.  Sometimes we find ourselves looking at a young person and saying, “when will you ever GROW UP!”  I’ve learned the hard way that the best answer is, “never.”  Does being “grown up” mean I know the answers?  If it does, I’m committing myself to a lifetime of immaturity.

A couple of my co-workers shared a New Year’s resolution to stop cursing.  Knowing both of these guys, I figure it will last about a month, maybe two.  No doubt, something I do will inspire a random expletive or two.  And when they “fall off the wagon,” to coin a cliche, let’s hope they decide to make a “February Resolution.”  Maybe that will take them to April or so, when I hope they resolve yet again.  Not because I care about their language – I really don’t, and I curse like an angry longshoreman myself.  But it’s something they want to work on in their own lives, and I like these guys, so I wish them the best.

I’ve had a few New Year’s resolutions like that.  One of them was losing weight.  After about 20 years of making the resolution, I embarked on a path that helped me lose about 50 pounds.  I still have more to go, so I’ll keep that “resolution” this January 1st (as soon as I finish this candy bar…).  Hey, we’re on the way.  Another is to be more diligent about my practice habits, both martially and musically.  Self discipline has never been a strong suit of mine, so pursuing this resolution will make me a better teacher, martial artist, and musician.

A close relative of mine once pontificated on New Year’s resolutions as being “hypocritical.”  He never makes them, he said, because they’re only going to be broken anyway.

Duh.  That’s not the point.

You’re not going to change your life with a single decision on one day, regardless of how much the champagne flows.  January 1 is as good a day as any to start a new approach toward something you want to change.  Then, in February or March, when you wake up and discover nothing has changed, MAKE THE DECISION AGAIN.  Our lives are a result of the symbiosis between our habits and our decisions.  You’re going to have to change LOTS of decisions, over and over, before you change your habits.  How long did it take for your kids to “grow up?”  Do you think you’re any different?  (Having never really “grown up,” I’m certainly no different.)

We’re just turning the corner out of the holiday season.  No doubt we’re wondering what, if anything, we’ll be able to take from the “spirit of the season” into the coming year.  Perhaps New Year’s is the same thing.  Can we decide to improve or grow in one small area of our lives?  And when (not “if”) we slip up, will we get up and resolve AGAIN?  Yes, the slip-ups will feel discouraging.  That’s the journey we’re on in this life, so get over it.  Laugh at your mistakes, because you’re human, and like it or not, your screwups are as funny as mine.  Then pick up the torch and keep marching.  No guilt, no self-recrimination.  Just, “Oops.  I’d better get on that.”  And then get on it.  It’s really not any more complicated than that.