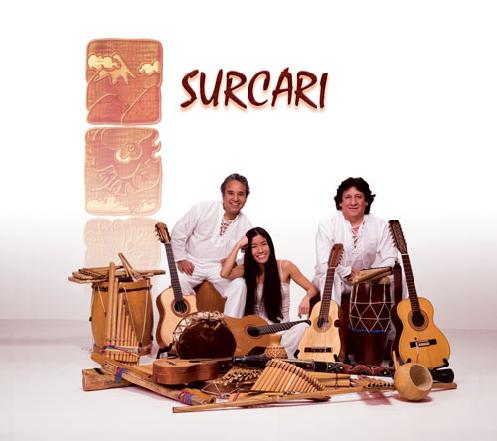 Tonight I got to do something I haven’t been able to do in a while – go to a concert, have fun, and hear something genuinely unique.  The ethnic group Surcari brings just that type of performance to the stage.

Surcari is the ethnic/folk trio of Lorena Garay, Eugenio Huanca, and Tany Cruz.  They perform an eclectic mix of Latin- and South American works, Puerto Rican selections, and with neck-snapping artistic agility, manage to mix in a strong European sensibility with some strong Celtic flavor.  Garay is the epicenter of the ensemble, having grown up in Puerto Rico and later trained at Hartt and the Puerto Rico School of Music.   Both Huanca and Cruz bring urban and South American soul, with terrific musicianship and an almost athletic flair for playing just about anything.

Surcari brings a breathtaking array of ethnic acoustic instruments to the stage.  I counted 24 instruments this evening, but there might have been more.  Garay takes the time to introduce each piece and help the audience understand what was about to happen, in a way that even the least musical listener could understand.

If this is starting to sound like a school assembly, believe me, it’s way better.  (Surcari does school assemblies, by the way, but no matter.)  These three are top flight musicians.  There was a moment about half way through the concert when a half-dozen of our kids were in the back of the house dancing.  Before long, several of us adults had joined in.  More than a concert, it had become a little happening for those of us lucky enough to be there.

Surcari manages to capture the passion, beauty, intensity and complexity of a diverse array of cultural music.  At the same time, they make surprising combinations work on stage.  Before tonight I had never envisioned a bass pan pipe duet.  But you could have knocked me over with a stick as I heard Huanca and Cruz bang out a complex counterpoint that was thoroughly engaging, and would have given a marathoner a run for his money.  At another point the group enacted the sounds of the rainforest, and actual rainforest recordings sounded less genuine.  Guitarist Garay can also wield the Ocarina like a dove, and make the November night seem like equatorial bliss.  In the finale, all three musicians let us see their virtuosity and their soul.  It was a real treat.

Surcari comes from the spanish word “Sur,” for south, and “Cari,” the first part of Caribbean, referencing Garay’s Puerto Rican homeland.  They take the best of music from all these cultures, ignore all the rules, and the result is an unlikely and ingenious series of engaging, catchy, and non-traditional arrangements of traditional works.  It’s authentic, but more important, it’s fun.

Surcari is a local group, and can be booked through their web site, lorenagaray.com.  The CD is great, but the live performance is even better.  It is a real treat to see and hear something genuine and unique nowadays.