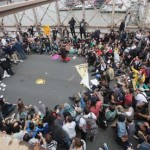 NYPD prepares to make arrests on the Brooklyn Bridge

Absolutely new and different, yet somehow, it isn’t.  The U.S. economy is on the rocks, the global economy following, and there are protesters occupying Liberty Plaza on Wall Street.  And, bit by bit, these occupations are beginning to spread across the country. 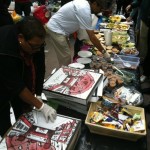 The Liberty Plaza Protesters Have a Stocked Kitchen, Child Care, and a Strong Net Presence

The protests are, perhaps, a bit less focused as the ones we remember from the late 60’s and early 70’s.   The protesters are mostly young people, and they’ve been camped out in Liberty Plaza for over two weeks.  They set up a kitchen, cots, child care, and speakers 24/7.   The place has the look and feel of a hippy commune with smartphones.

But there is one major difference: They’re wired.  They have a web site, http://occupywallstreet.com, and they have a live feed from the protest.

This is the politics of protest and change in the 21st century.  At first the protests were largely ignored by national media, popping up in only some of the New York news outlets.  Then it went viral on the internet.  Now that similar protests are popping up all over the country, the media is paying attention.

People are protesting for jobs, against corporate greed, for democracy, against capitalism, for government action, and against political leaders.  The protesters are, in many cases, out of work.  The protest is politically left, but hasn’t yet declared for or against a candidate.  The sit-in on the Brooklyn Bridge on Sunday afternoon looked like the sit-ins of the past.  We’re seeing an American classic unfold, right on the web.