Don’t ask, don’t tell…glad to see the death of a stupid law. 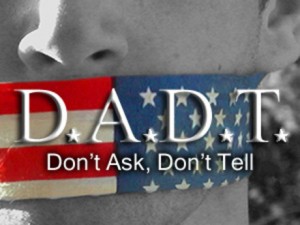 I’ve never had the honor of wearing the uniform.  I admire and respect anyone who does.  For the life of me, I can’t figure out why, in 2011, we care whether a soldier is gay or straight.  Can anyone help me out with that one?

We are blessed to have an all-volunteer military.  Everyone in uniform chose to be there.  Hopefully, we’ll be able to avoid a draft in the future, but there are certainly no guarantees.  Having physical requirements makes sense.  We ask the same of firefighters and police officers, after all.  But why do we care if a soldier is gay?

The “Don’t ask, don’t tell” law compounded stupid with more stupid.  The way the law was written, it was OK to be gay, so long as the gay soldier stayed in the closet.  That sounds like the old saying, “I don’t care who you are, so long as you don’t force it on me.”  Unfortunately, it only served to support gay soldiers so long as they maintained a dysfunctional and harmful existence.  It sounds like homophobia wearing a libertarian trenchcoat.  Telling someone you’re gay isn’t “forcing” it on anyone, any more than telling someone you’re straight.

I’ve heard the arguments against “unit disruption,” in support of Don’t Ask, Don’t Tell.  The same arguments were used in the 40s and 50s to combat military segregation.  Back then, “the unit” was disrupted, then “the unit” got over it.  I suspect the same will happen here.  I believe in our military, and appreciate the fact that they’ve done an amazing job all over the globe.  If they can handle Bin Laden, Saddam, the Viet Cong, North Korea, Tojo and Hitler, I think they can handle a few soldiers coming out of the closet without imploding.  I think our men and women in uniform are strong and capable.

Discipline in the military is important.  Tailhook taught us that.  My Lai taught us that.  Sexual orientation isn’t a behavioral choice.  It has nothing to do with discipline.  People who are out of control should receive justice, gay or straight.

If a soldier can stand in harms way and take a bullet for me, she or he has my respect, appreciation, and support.  Thanks.