McBlackBelts? It’s an honor, not a Happy Meal.

McBlackBelts? It’s an honor, not a Happy Meal. 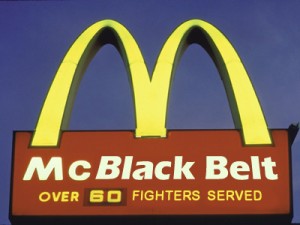 If black belts are as easy as a Happy Meal, do they really mean anything?

A while back I was working at a studio and a boy approached me, pointed to me, and said, “Ha, ha!  I’m a higher belt than you.  I’m a black belt.  You’re only a red belt.”  The boy was 7, and as it happens, a 2nd degree black belt.  His 6 year old sister was about to test for her black belt later that spring.

Of course, I congratulated the little guy on his accomplishment, and encouraged him to keep working hard.  A ‘red belt,’ in our school, is someone training to become an instructor who had not yet earned his/her black belt.  In this little guy’s world, he was just pointing out facts as he saw them.  But I have to admit, the conversation left me shaking my head.

A black belt is an accomplishment, no matter what style of martial arts you study.  But speaking as a black belt, an experienced educator, and a parent, we are doing a serious disservice to young people when we make adult Black Belts available to kids in Kindergarten, and then tell them it’s the same as what the grown-ups do.  I’ve taught young students the martial arts, and I’ve taught them to brush their teeth.  There is a significant difference between the two.

Certainly it is possible for young children to earn advanced ranks in the martial arts.  But a Black Belt needs to mean more than learning a curriculum, attending a prescribed number of classes, or executing certain moves.   It needs to signify a level of competency, a commitment to the ideals and beliefs of a system, and a commitment to giving back to the school and the art.  Black belts become “Elders” in the system; a martial arts older sibling if you will.  At the same time, black belts must demonstrate humility and the attitude of a lifelong learner.  They are the living embodiment of the art itself.  These are broad concepts and mature understandings.  It makes absolutely no sense to ascribe this to a seven-year-old.  In doing so, we miss the significance of the art, and worse, the beauty and innocence of the child.

John is the Chief Instructor at Steve DeMasco’s Shaolin Studios of Fairfield, and has 20 years experience in public education.