Angry Birds offers insights into the physics of flight AND our response to broken family relationships.

“The students were playing it all the time in the cafeteria on their smart phones.  As a former science teacher and computer programmer, this just seemed like a natural progression,” said Newtown High School’s Principal.  The principal, himself a physicist, said he was compelled by the physics applications that are so integral to the game.

This has led to the development and implementation of a new course this fall, “7922 – Avian Logic and Perturbed Behaviors.”  Co-taught by a Physics and a Psychology teacher, this course awards 1/2 credit each in the History and Science departments.  (The course may not be used to satisfy graduation requirements.)  Students will examine, in depth, the psychology of angry avian behavior, and examine the physics of flight, gravity, and architectural constructs that make up this fast-growing game. 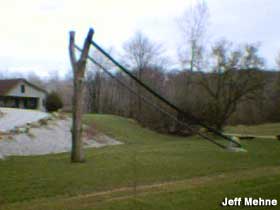 A large sling-shot, like the one pictured here, will be built near the school's entrance.

The course will meet daily, with a regularly scheduled lab period, like any other science course.  Some of the experiments will include:

In a statement released on that same web site, the NHS Science Department has confirmed that no actual birds will be harmed, and the course was designed with the assistance of the Newtown Audubon Society.

No study of Angry Birds would be complete, however, without an understanding of loss and broken family ties, a component so integral to the psychological construct of the protagonists.   Based on the criminal separation of parents from their children, the parents themselves sacrifice all to protect their young and visit revenge on the villains.  “It will bring a new dimension to our study of To Kill A Mockingbird,” said one English teacher who spoke on the condition of anonymity.  “I suspect we will see more than one student creating a presentation in which Jem flings Scout at Boo Radley’s house.”

“It raises important questions about children and families torn by natural and manufactured conflict,” said another.  “The issues are difficult, yet compelling.  With so much of the world torn by war, we’re able to bring these very real issues close to home for our students.”  It is those complex family issues that have restricted this course to Juniors and Seniors.   According to sources close to the administration, this decision was undertaken to avoid any controversy.

The Physics of Angry Birds has taken hold across the globe, as it turns out. Associate Professor of Physics at Southeastern Louisiana University, Dr. Rhett Allain, has made an in-depth study of the physics involved in avian projectiles.  Atlanta 9th Grade Physics teacher John Burk has done the same with his students.

The psychological aspects are just as real.  While many see the game as a harmless diversion, others have praised it’s cathartic effect on the player.   “Angry Birds gives people a release for their aggressive impulses,” says Dr. Tomas Chamorro-Premuzic, Reader in Psychology at Goldsmiths, University of London. “They may not realise it, and may not thank you for pointing it out, but it has a cathartic effect, letting them act on their aggressive tendencies.”  Throughout the course, students will engage in a host of role-playing activities, including stealing eggs from the culinary department, and flinging stuffed animals from the guardhouse-mounted slingshot in the parking lot.

The fact that Angry Birds is available free on Google’s Chrome browser made this an easy sell to Central Office and the Board of education, particularly in these tough economic times.  “We were able to implement a software-based course that was cost-neutral,” said the NPS Director of Technology.  According to budget figures released on the NPS web site, the savings from freeware will offset the cost of .2 teachers, who will be assigned to teach the course.

Interested students and parents are encouraged to call the NHS Guidance Department at 203-555-1212 if they are interested in enrolling.

John Tusch is an amateur satirist, a fan of Angry Birds, and a fan of Newtown High School.